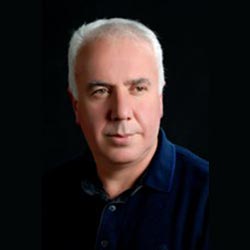 He was born on January 26, 1969 in Erzurum. He completed his primary, secondary and high school education in Erzurum. He graduated from Atatürk University Technical Sciences Vocational School in 1990 as an Electrical Technician. He started his working life in the same year. He worked as a production, advertising, marketing and sales person in different sectors, and worked as a manager. Between 1992-1993, I completed my national service. In the 1993-1994 academic year, he worked as a classroom teacher with a substitute teaching staff. Between 1995 and 2000, he worked as a production, shipping and quality control supervisor in a private company in Bursa. Mesut Turan, who returned to his hometown of Erzurum in 2000 and started to work in a company operating in the book and stationery sector, still works as the Coordinator of National Education Institutions in this company.

Mesut Turan had a special interest in literature since his secondary school years. He began to read regularly and continuously. After these readings, he started writing works. Especially in his early youth, he worked on poetry. He has many poems already written but unpublished. His first book, The Secret in the Table, was published by Damla Publishing House in 2015. He is married and has two children.